The North of England Home Service

A haunting and elegiac portrait of a faded comic, an ex-boxer, and a North-East gripped by the 2001 epidemic of foot-and-mouth disease. 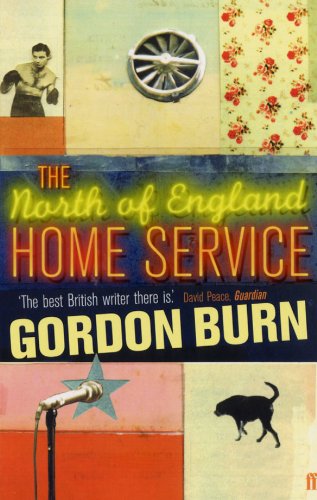 The North of England Home Service

My first experience of Gordon Burn was Somebody’s Husband, Somebody’s Son, his 2004 biography of Peter Sutcliffe – better known as the Yorkshire Ripper – that I read last year. That book somehow transcended both biography and true crime, neither normally genres of choice for me, and succeeded in linking Sutcliffe’s crimes to the unfeeling misogyny of 1970s Britain and thereby rendering complicit the society that produced Sutcliffe as well as the man himself. The picture Burn painted of the everyday brutality and cruelty of that society was uncompromising and visceral, and I resolved to seek out more of his work.

Although Burn has published other work along similar non-fiction lines, and is probably most famous for it, I wanted to explore his fiction output, and so dove into the North of England Home Service.

At its surface, the book is a portrayal of two has-beens living in the North East of England. The first, Ray, is a faded club comedian, the sort that only the North of England seems to produce; long since vanished from the TV screens, he’s still remembered by those of a certain age and origin, calcified in his own catchphrases, a proxy for his audience’s own nostalgia. The second is Ray’s assistant, Jackie, an ex-boxer whose promising career was ended prematurely by injury and who finds himself acting as Ray’s driver, errand-runner, and confidante. Both men’s glory days are far behind them; both are trying to reconcile their present circumstances with the promise they both once held.

Ray’s sets, once performed to millions on TV, are now performed to hundreds at the club that he part-owns with a local businessman and that has a theme based on the area’s industrial past. Waiters wear flat caps and “ganzies”; patrons turn up in costume. The slogan of the place is “the kind of club that takes you back, even if you were never there originally”. Ray, like the costumes, is a relic of a bygone age, an age fast being made sanitised and cartoonish by the smear of nostalgia.

The backdrop to events is the 2001 outbreak of foot-and-mouth disease that decimated British livestock farming. Ten million cows and sheep were culled in efforts to stop its spread; innumerable farms were ruined financially. The economic damage ran into the tens of billions of pounds, but the emotional damage was far harder to quantify.

The reality of this setting, during the harrowing events of the foot-and-mouth crisis, aren’t the only nods to history: Ray and particularly Jackie weave in and out of the lives of countless historical figures, too, from boxing promoter Jack Solomons1 to calypso legend Lord Kitchener.2 In doing so, Burn threads Ray and Jackie into the fabric of post-war Britain, making them witness to the near-incomprehensible changes that took place in our characters’ lifetimes. And so, while it seems at the outset to be an elegy for two men, the book is far more an elegy for a region and for a way of life: the North East of England, once an industrial heartland, is now as down-on-its-luck and useless to the rest of the world as Ray and Jackie are, living on its past glories, missing the drive and purpose that once made it the powerhouse of industrial England.

It’s perhaps not surprising, then, that the most evocative passages in the book are Burn’s descriptions of place rather than person: the “warm encompassing murkiness” of the Jewish tenement building Jackie lives in; the seedy glitz and painted-on glamour of Soho in the 50s; the silent scars of a North East whose mines and factories were abandoned long ago. Particularly harrowing are the descriptions of the mass culling of livestock that represented the government’s attempts to halt the spread of the disease:

“Driving home at night from Bobby’s, Jackie would begin to be aware of the putrid smoky smell seeping in through the radiator and around the windows before he entered the area of the thick white smoke-fog made of powdered bone and hide and animal render, and lazy plumes of fat-saturated smoke blowing out to sea. There was a lot of traffic movement at that time of night, and driving along the coast road Jackie would pass army Land-Rovers and large container wagons queuing at the quarry entrance. (Some of the wagons, he knew, contained full loads of ash from the pyres, classified as hazardous waste. It made him think about things he wouldn’t choose to think about in the lonely early hours with the heater on and the radio playing and Ellis restless and sneezing behind the dog-guard. It made him think about the human ashes coming from the crematoria at Auschwitz and Birkenau and how they had been put to use as thermal insulation and fertilizer and, most horribly to Jackie, used instead of gravel to cover the paths of the SS villages located near the camps.) The pyres burned for weeks, glowing jewel-like and stinking in the dark, each of the hundreds of pyres feeding its own consistent, blue-orange blooming corona of flame.”

“Nostalgia”, Burn has Ray think, “is never about the past, but about felt absences or a sense of something lacking in the present.” The funeral pyres of livestock, in their own twisted way, remind people of the times when factories and mills belched out toxic smoke; a filthier time, but also a time of work, of meaning, of certainty. As the pyres burn, and as Ray’s and Jackie’s lives drag on, there’s no sense of reconciliation and no hope for recovery; just fading memories, and the inescapable sense of something lost.