Nothing is True and Everything is Possible

A depressing and exhilerating portrait of propaganda and corruption in post-Soviet Russia. 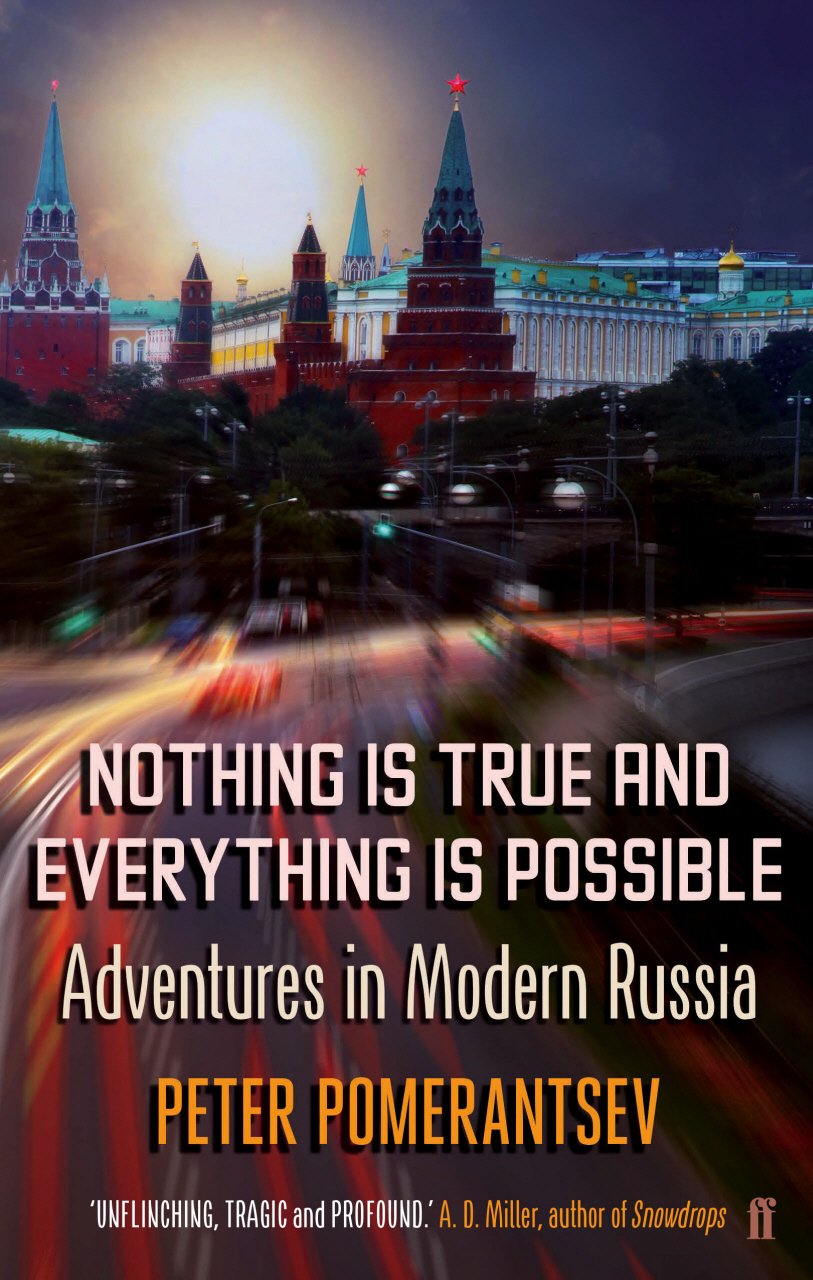 Nothing is True and Everything is Possible

In 1991, after a long unwinding that had begun in the mid-1980s, the Soviet Union finally collapsed. Along with the obvious political, economic, and social upheaval, the union’s final dissolution also ended 74 years of relative ideological certainty, leaving behind a vacuum of ideas. What would take the place of communism, that had in its various forms been the only acceptable public ideology for the entire history of the USSR? Would it be western-style capitalist liberal democracy, as the US hoped? The continuation of centrally planned technocracy, as so many ex-Soviets wanted? Or would the Russians prefer, as they have done at so many other points of uncertainty in their past, the powerful and uncompromising rule of a strongman?

It’s easy to look at the 25 years since the end of the USSR, and in particular the 18 of those years in which Vladimir Putin has held sway over the Russian Federation, and conclude that Russia has indeed thrown its lot in with a authoritarian strongman – concluding also, perhaps, that Russia is incapable of being ruled in any other way. To do so, though, would be to ignore the subtleties and intricacies of the society that has emerged in Russia in the past three decades.

Peter Pomerantsev was born in the USSR to dissident parents who fled the country shortly after his birth. Raised in London, he became a film and television producer and returned to the country of his birth in 2006, aged 28, to work on TV programmes there. The Russia he found – in all its surreal glory – is laid bare in Nothing is True and Everything is Possible. The book is his attempt to make sense – to himself as much as anyone else, one feels – of the logic-defying world he found himself in. How could people he knew to be liberals support the policies of Putin’s Kremlin? How could the Kremlin itself support Orthodox nationalists one day, liberal pressure groups the next, football hooligans the day after that? Just what was true in all of this?

Nothing is True… is a portrait of a country in flux. Its inhabitants, so used to wearing ideological masks throughout the communist years, think nothing of adopting multiple personas as demanded by the political situation at any given time. Its rulers, desperate to hold on to power at all costs, sow the seeds of confusion, presenting a moving target that becomes virtually impossible to coherently oppose.

The book is, for the most part, a series of vignettes, character studies of people that Pomerantsev met on his travels throughout Russia while making factual television programmes. There’s the beautiful young women – known derisively as tiolki, or “cattle” – looking to become the mistresses of millionaire oligarchs. There’s the owner of a pharmaceutical company whose business is stolen in an act of reiderstvo, the government-sanctioned asset-grabbing of private companies by corrupt officials. There’s the NGO technocrat, tasked with developing the post-Soviet economy and finding himself posted to a staggeringly corrupt and crushingly depressing Kaliningrad, forced to watch the money from his programmes siphoned off into the private accounts of ministers.

Pomerantsev’s cast of characters find themselves buffeted this way and that by the vagaries of a system they can’t understand but are forced to inhabit. Some prosper, some are defeated, but one gets the sense that none of them have much say in the matter. Meanwhile society and politics shift and turn, constantly changing shape and form, always out of reach. Opposition parties come and go; the state supports myriad contradictory causes; enemies external and internal appear and then disappear without discernible reason. Government policies are impossible to understand and define, let alone oppose.

This relative stability of the ruling elite is, Pomerantsev argues, inextricably linked to that underlying chaos; far from being the result of an absence of cohesive power, this chaos is in fact the carefully crafted strategy of “the world’s first post-modern dictatorship”.

The man more responsible than any other for the campaigns of misinformation and surreal shape-shifting is Vladislav Surkov.1 A long-time friend and ally of Vladimir Putin, Surkov has had many official roles, from Assistant to the President on Foreign Affairs to Deputy Prime Minister. But his power has remained more or less constant regardless of his title, and he is one of the key architects of Putin’s rule. Key to his success has been the masterful way in which he has taken ownership of the entirety of the political discourse inside Russia. Opposition movements exist, but they are created by the Kremlin as and when it’s expedient; opposition speech is often tolerated, and found on TV channels – for as long as it’s useful, anyway.

“One moment Surkov would fund civic forums and human-rights NGOs, the next he would quietly support nationalist movements that accuse the NGOs of being tools of the West. With a flourish he sponsored lavish arts festivals for the most provocative modern artists in Moscow, then supported Orthodox fundamentalists, dressed all in black and carrying crosses, who in turn attacked the modern-art exhibitions. The Kremlin’s idea is to own all forms of political discourse, to not let any independent movements develop outside of its walls. Its Moscow can feel like an oligarchy in the morning and a democracy in the afternoon, a monarchy for dinner and a totalitarian state by bedtime.”

Adding to the confusion is the nature of Surkov himself. A fan of modern art and gangster rap – he famously keeps a photo of Tupac Shakur on his desk next to that of Putin – he writes lyrics for rock bands and pens novels under a barely concealed pseudonym. Russia’s supposed éminence grise cuts less a figure of Père Joseph than of some situationist stunt; every new revelation is less believable than the last, seemingly deliberately so, until he wriggles from your grasp. As the filmmaker Adam Curtis put it:

“Surkov turned Russian politics into a bewildering, constantly changing piece of theater. He sponsored all kinds of groups, from neo-Nazi skinheads to liberal human rights groups. He even backed parties that were opposed to President Putin.

“But the key thing was, that Surkov then let it be known that this was what he was doing, which meant that no one was sure what was real or fake. As one journalist put it: ‘it is a strategy of power that keeps any opposition constantly confused’ – a ceaseless shape-shifting that is unstoppable because it is undefinable.”2

Although Pomerantsev wrote Nothing is True… in 2015, the comparisons with the election of Donald Trump in 2016, and with the antics of the alt-right, are inescapable. Trump’s approach to the truth, like Surkov and Putin’s, goes beyond simple disregard and into something more hostile: by systematically removing the population’s ability to tell truth from fiction, Putin’s regime has exhausted their ability to resist; by concentrating power in a hall of mirrors, the Kremlin forces people to contort themselves to its will in an effort to curry favour and move up in the world.

Trump’s tactics are clearly from the same playbook as Putin’s. The key difference, though, is the foundations on which they’re built. Pomerantsev argues that 74 years of ideological flexibility, brought on by a need to present a Communist face to the world despite one’s own feelings, enabled Surkov and Putin’s surreal approach to government. People were used to presenting different faces in different situations, used to governments that lied openly to them, used to quietly living their own lives and avoiding engagement. The question is: will this radical, exhausting, and destructive approach to government work in the West? In the next few years, we’ll find out.