Yes We Have No

A feverish, frenzied exploration of the seedy, rebellious sub-cultures and sub-classes of Britain, where “Anglos” fear to tread. 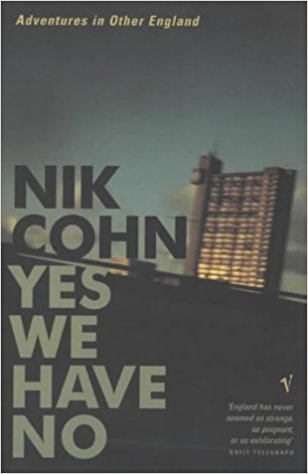 Yes We Have No

Nation states, by their very nature, move inexorably towards a single homogenised view of themselves. Myths are made, identities assumed, and the rough edges of contradiction are slowly buffed away in pursuit of a singular, polished idea of nationhood. It’s simpler that way.

Nik Cohn, from his childhood in Derry to his teenage years wandering Soho in the 1960s, has never been much interested in that reductive view. Life, for him, is in the precisely those rough edges that society tries so hard to file away. He founded an entire career on writing often-frenetic accounts – fictional, documentary, and in the grey area between – that skewered dogmatic ways of thinking and took great pleasure in slaying, with as much violence as possible, polite society’s sacred cows.

His iconoclasm perhaps reached its peak with 1968’s Awopbopaloobop Alopbamboom, his evisceration of the direction he saw that popular music was then headed in. Infamously hammered out in a matter of weeks in a cottage in Ireland, when he was aged just 22 – albeit with several years of music criticism behind him – the book successfully predicts (and, ahead of time, rejects) the twin evils of prog rock and production-line-fabricated, saccharine pop stars that were to come. With it and his other work in that period, Cohn became known as much for his love of the outsider as for his rapid-fire prose and take-no-prisoners opinions. That love began with his upbringing as a child of Jewish parents in sectarian Derry in the 1950s:

“Even though he went to a Protestant school, he wasn’t a Protestant; his contact with the Catholic side of Derry was nil, he says. ‘I saw Teddy boys and I knew I didn’t belong there either. And so it set up a lifetime pattern of looking at tribes that I could never be part of.’”1

Cohn’s fascination with those in the margins culminated in Yes We Have No, his 1999 account of a months-long roadtrip through the sub-cultures of England. It’s partly a revisiting in his 50s of those places that had occupied his earlier years, and partly an exploration of the new. At his side is the then–20-something Mary Carson, a Doc Martin-wearing, take-no-shit Derrywoman who alternately fights and charms her way into society’s seedier parts. Through her youth and her moxie, she’s their ticket to many of the worlds they manage to access; one senses it would have been a rather different trip without her.

Their quest is to map out the boundaries and inhabitants of what Cohn calls “the Republic”, an independent state-within-a-state, its misfit inhabitants united by their rejection of and incompatibility with the mainstream. We meet Asian ragga DJs in Hounslow; ex-miners in Yorkshire; a Chinese Elvis impersonator in Sussex; hippie travellers on a campsite in Cornwall; biker gangs; fetish-party ravers; spiritualists. Some have been in England all their lives, some are fresh off the boat; all of them are part of the Republic.

Two things are remarkable about Cohn’s approach. First is his skill as an observer; he approaches each situation with an open-hearted curiosity that’s initially surprising, given the jaundiced eye through which he so clearly views the world. But second is his ability to draw a coherent boundary around the disparate crowd of weirdos he encounters on his journey, uniting a group that seem otherwise to be utterly heterogeneous.

I assumed at first that the subjects that so fascinated Cohn would be rebels, outsiders, people who’d consciously rejected the system and what it stood for, people violently outside the mainstream. There are plenty of those, sure, But there are plenty more who simply don’t fit into the neat boundaries of society, whose existence the consensus mental model of Englishness cannot accept without crumbling. The Republic is a group of people united by nothing more than their non-conformity, by the condemnatory sneer – or, worse, the trained indifference – of the “Anglos”, the folks that fit neatly within that national myth:

“At the first whiff of the republic, out comes The Look… that blank, veiled face, infinitely superior, that the Anglos put on whenever they sense attack or the presence of an intruder: ‘Saintly sufferance.’”2

It’s that paralysed, frightened conformity that really earns Cohn’s scorn; that sublimation of one’s own self, the fear of a world without agreed-upon structures and shibboleths that explain the world and one’s place within it. It’s hard not to feel, when reading it, a little guilty; few of us, I imagine, can count ourselves as part of the republic. I sense, though, that this is precisely the point; to shake the rest of us out of our complacency.

But perhaps not. Cohn was never one for campaigning. Not for him, lofty attempts to change the world, not even those found within the Republic; better just to be society’s conscience, holding up a mirror to it, pointing out its failings. There was no shortage of failings in 1968, fewer still in 1999, and the current era seems almost incomparably awful. Although Cohn has been engaged since 2005 in writing what he’s said will be his last novel, one longs for him to turn that mirror on us once again, for one last time.