A walk through three districts; a glimpse of three very different Stockholms. 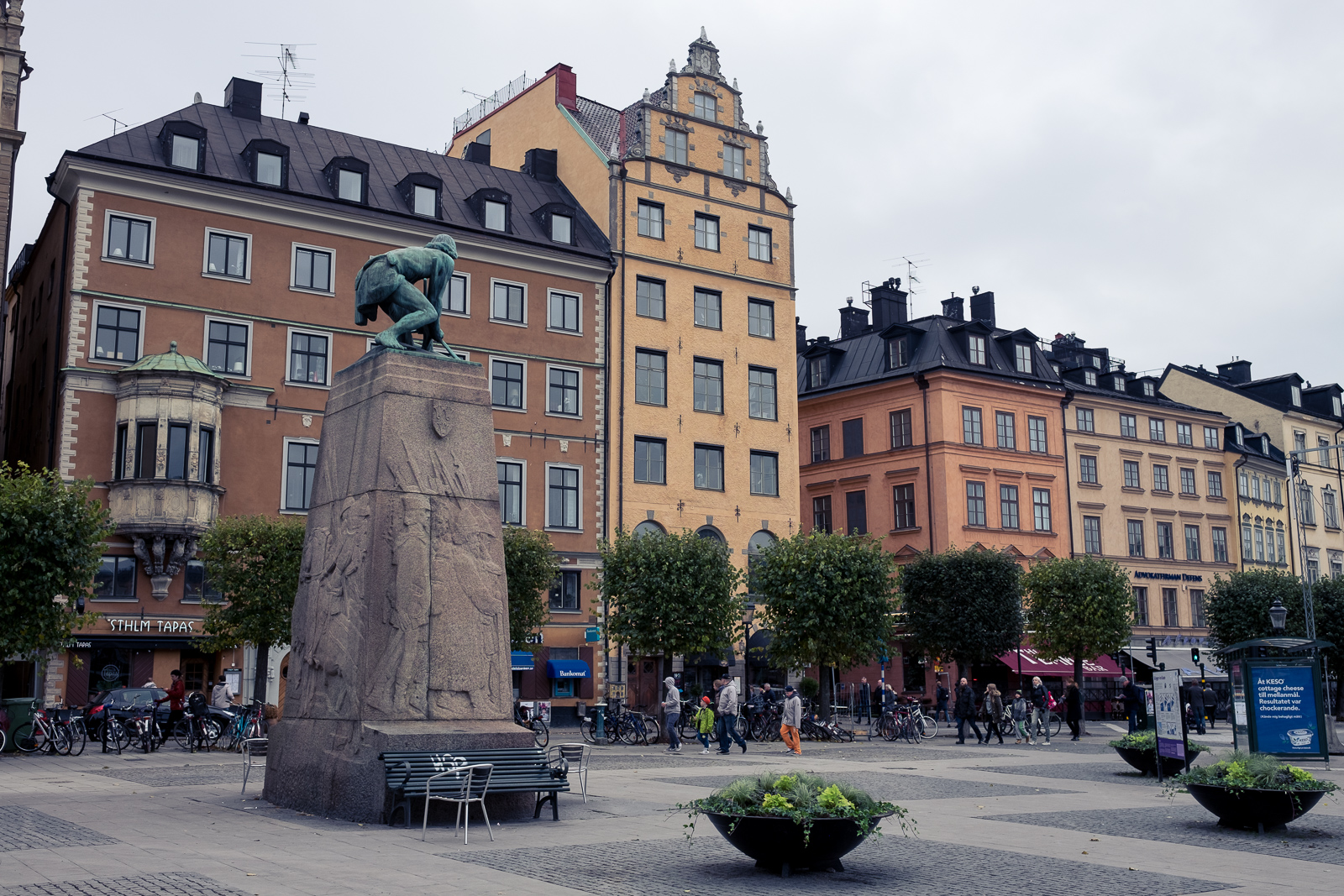 Stockholm’s foundation, if you believe the myth, owes much to superstition and to the vagaries of of river currents. The residents of Sigtuna, Sweden’s oldest city and the former capital, had grown tired of raids by armed men, and sought a new capital. They hollowed out a log, filled it with gold, and allowed it to float downriver. It eventually washed up on what is now Gamla stan, Stockholm’s old town, and this auspicious sign was enough to found the city there. More practically, the island sat at the confluence between Lake Mälaren, a strategic waterway that reaches into the heart of Sweden, and the Baltic Sea. In the intervening centuries Stockholm has spread out across the entire archipelago, now occupying fourteen main islands.

This quirk of geography gives Stockholm a rather unique feel. Each island, separated from the others by water and left to evolve in its own direction, possesses a unique atmosphere, a unique culture, unique architectural styles. To cross a bridge, very often, is to be transported to a different century, a different stage of the city’s evolution.

Emerging from Stockholm Central Station, you find yourself in Norrmalm, the northernmost of central Stockholm’s districts. The busy roads and grubby storefronts belie Norrmalm’s role as commercial district and upmarket shopping destination; walking through Sergels torg with its enormous central glass column and onto Hamngatan, though, scruffiness begins to give way to splendour.

There are few places that sum up Upmarket Stockholm better than Nordiska Kompaniet (NK), the 1915 department store that occupies almost a whole block of Hamngatan. Large windows, filled with elaborate displays, run across the art nouveau frontage at street level; the upper five stories are neatly peppered with elegantly proportioned windows, a beautiful blend of the neoclassical and the art nouveau. Enormous gilded NK logos dominate either end of the façade, their elegant art deco style crowning the overall effect. The building was designed by Ferdinand Boberg in 1915; he also designed the squat and voluminous red-brick Central Post Office, representative of the National Romantic style and located a few hundred metres away in Vasastan.

If its façade projects a somewhat simplistic elegance, NK’s true opulence is revealed after stepping through the main doors: an entrance hall opens up into a stunning atrium, rising up through four stories. Plain marble columns run the length of the atrium, framing postcard-like views into each floor’s goods. Shoppers, leaning on the ornate art nouveau railings, look outwards and downwards, drinking it all in as well-dressed Swedes and curious tourists flood through the doors and into the store. 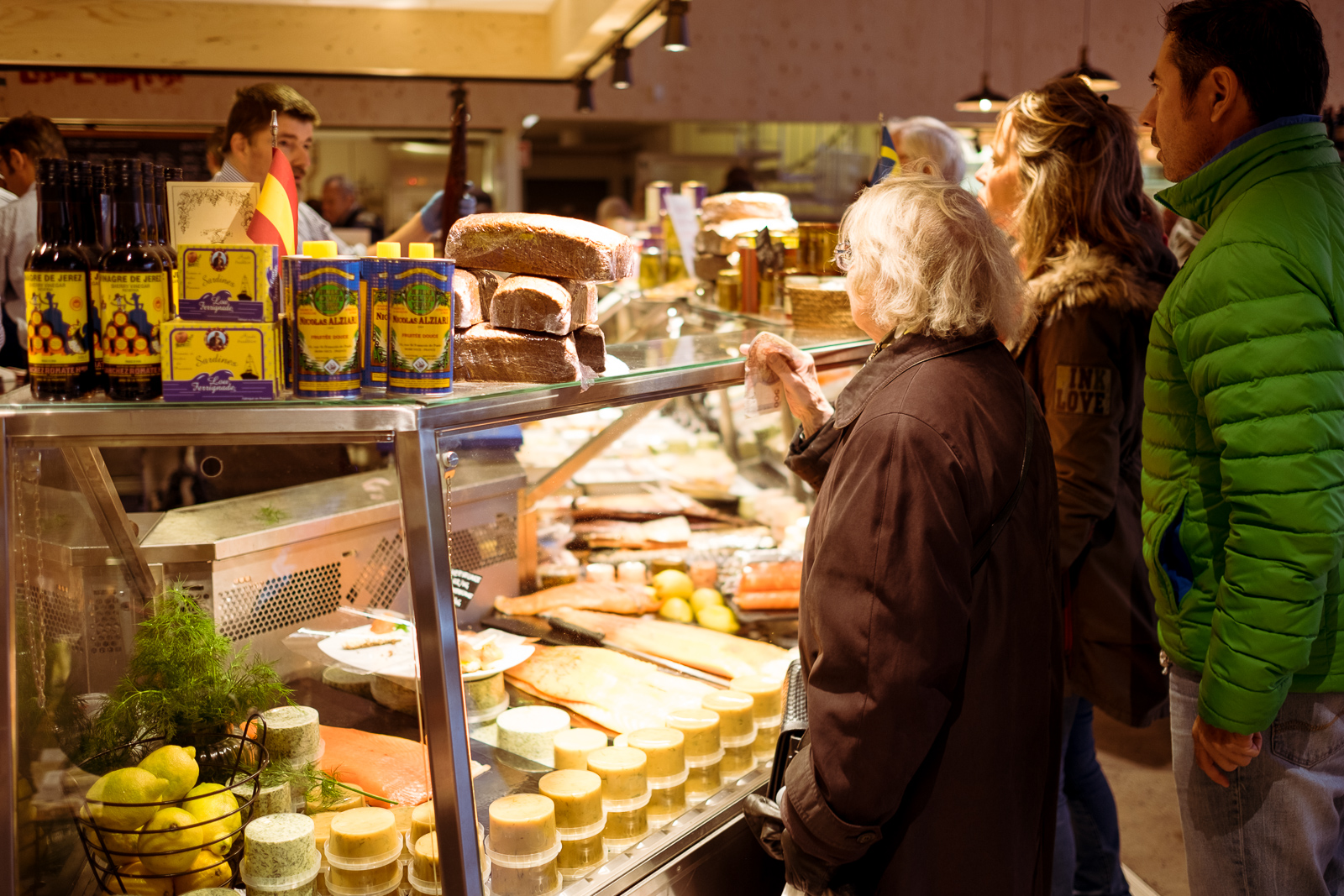 South of Hamngatan, the tree-lined Kungsträdgården (“Royal Garden”) stretches in stately splendour southwards. In spring, the trees that line the park are awash with pink-white blossom; this cold and blustery autumn day presents a less colourful image, not helped by the concrete that covers the northern part of the park. This concrete expanse is, thankfully, broken up by a long and charming pool, recessed slightly at the bottom of steps that – even on such a frigid day – provided seating for countless young couples and groups of friends.

As the park approaches the turbulent waters of the Norrström, and with it the Strömbron bridge that is one of several to link Norrmalm with Gamla stan, the imposing bulk of the Kungliga Operan (“Royal Opera House”) rises up to the right. This current neoclassical building, designed by Axel Anderberg, replaced the – to my mind much more charming – 18th-century original at the death of the 19th century.

This newer opera house would dominate the skyline if not for its neighbour across the Norrström: the almost comically imposing Kungliga slottet (“Royal Palace”), its 1,400 rooms laid out in an enormous quadrangle, the ochre sandstone exterior further emphasising the sheer weight of the building.

The palace dominates the northeast corner of Gamla stan, the old town, and yet is utterly unrepresentative of the rest of the island. Walking away in any direction from the palace and its grotesque excesses leads you into a network of narrow, cobbled streets and alleys; the palace, in some respects, represents an intrusion of 18th- and 19th-century Norrmalm refinement into the more subdued and medieval old town.

Immediately south of the Royal Palace, the neoclassical Nobel Museum – formerly the stock exchange – opens up into Stortorget, the oldest square in Stockholm. Small and unfussy, the square is surrounded on three sides by haphazard three- and four-storied buildings, their façades covered in brightly coloured plaster. It’s this coloured plaster that is so characteristic of Gamla stan; most buildings are ochre or yellow, but greens, blues, reds, and other hues can be seen too. The effect, in its being so well-maintained if nothing else, is one almost of a theme park; pristine building stands next to pristine building, and one begins to crave at least some pockmarked plasterwork, if not an actual ruin; at least the feeling that someone might live here, if not a bustling residential area.

Gamla stan is resolutely medieval, but medieval on a human scale; the intense verticality of the gothic, all spires and steeply pitched roofs, is there, but in a manner that’s somehow more approachable than elsewhere. There’s a Germanic feel, the influence of centuries of trading as part of the Hanseatic League, and the centre of Germanic Stockholm – architecturally and historically – is the Tyska krykan (“German Church”), just south of Stortorget. It’s a beautiful example of the brick gothic architectural style, and is crowned with a copper-green tiled roof that’s visible from much of the city; along with the iron latticework of the Riddarholmskyrkan’s spire and the squat belfry of the cathedral, it provides the orienting skyline of Gamla stan. 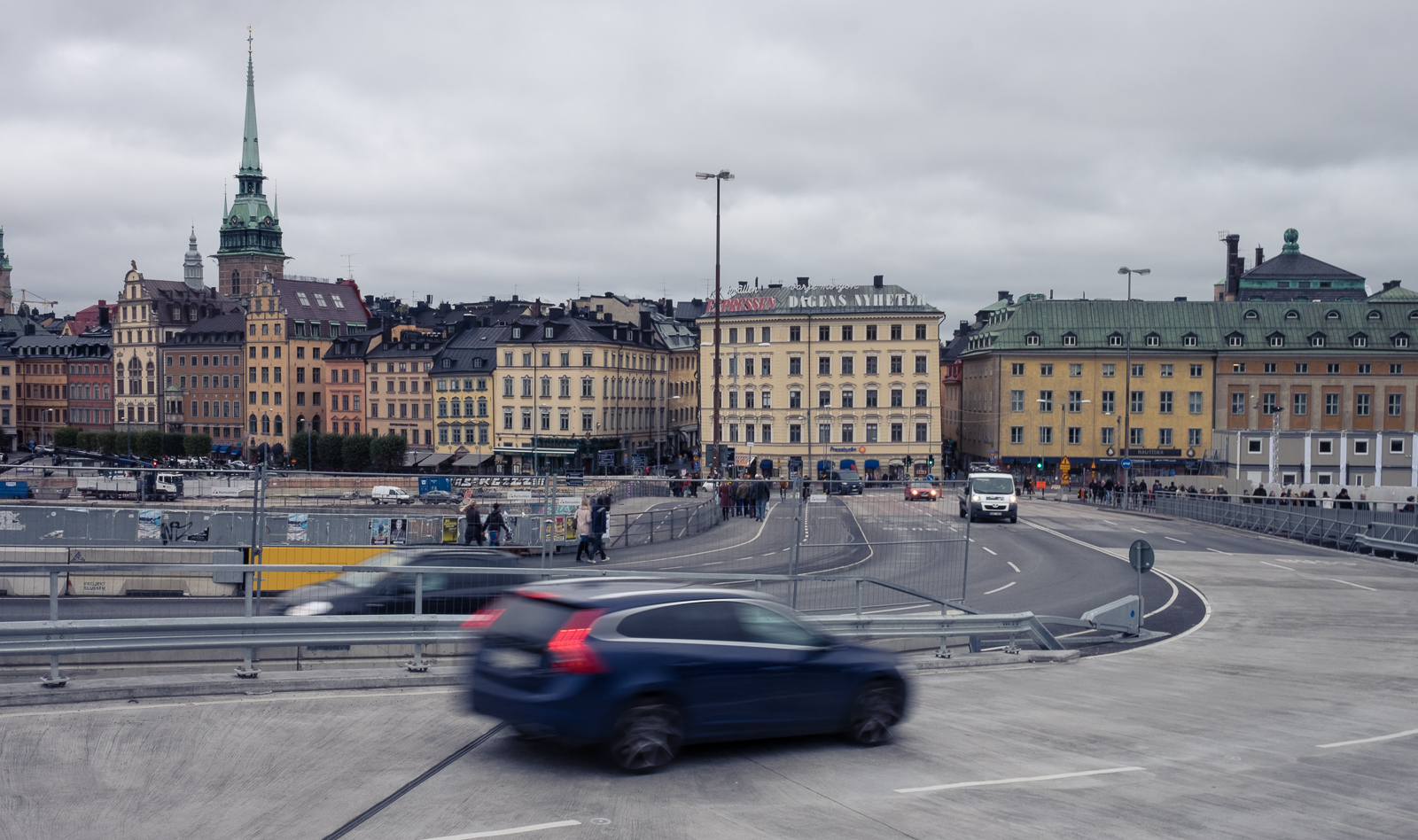 Crossing out of Gamla stan to the south, across the construction site that is the under-renovation Slussen system of canal locks separating Lake Mälaren from the Baltic, you reach Södermalm. This southern island was traditionally the heartland of Stockholm’s working classes, and even in the twentieth century was little more than a slum; it certainly was in the 1900s, when Greta Garbo was being raised here by her labourer father; she wrote later of the foetid and hopeless atmosphere:

“We were filled with anxiety, as if there were danger in the air. Such evenings are unforgettable for a sensitive girl. Where we lived, all the houses and apartments looked alike, their ugliness matched by everything surrounding us.”

Södermalm these days has been transformed utterly. Slum tenements have been replaced by upmarket coffee shops, boutiques selling carefully curated vintage clothes, and craft beer bars. Labourers, long since driven out to rougher suburbs like Vårby or Skärholmen, have given way to artists, designers, and their fellow travellers.

Despite this gentrification, Södermalm retains an authenticity missing elsewhere in central Stockholm. Unlike similar areas in London or Paris, it still feels like an area in which real people live. Its apartments – while clearly expensive enough to have driven out Söder’s original working class inhabitants – seem, for now at least, to be within reach of Stockholm’s creative classes. 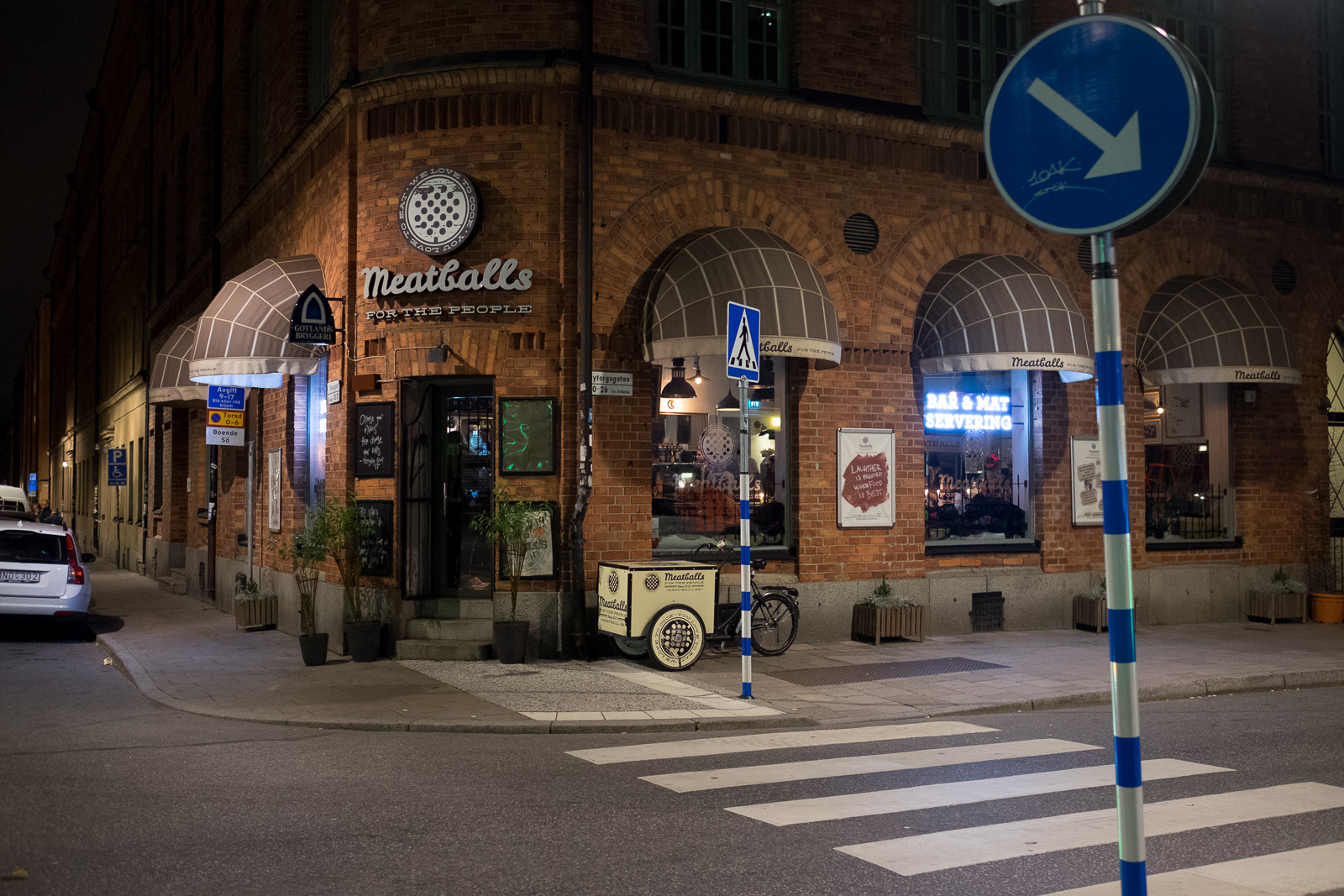 The nexus of this transformation is the area known as “SoFo” (“South of Folkungagatan”), and within that arguably the square of Nytorget. Meatballs for the People, the meatball restaurant-cum-craft beer bar; Nytorget 6, offering fine dining; a string of vintage clothing stores, independent galleries, record shops, and the other trappings of hipsterdom. The overall feeling, though, is warm and inviting; not exclusive or aloof or cooler-than-thou, but rather the expression of youthful creativity in a space where rents are still affordable and where influence and inspiration surrounds.

Perhaps the most wonderful thing about Stockholm is the way that the islands, separated by sometimes only a few metres of water, have developed such distinct atmospheres. Gamla stan, inhibited by its natural geography, remains the medieval core of Stockholm; the nobility have left, their influence long since having waned, but their architectural impact remains, indelible. Norrmalm, free to spread northwards and eastwards, fades less distinctly into the more residential Vasastan and even posher Östermalm, but also abuts distinctly the water to its south. Södermalm, separated always from the nobility and grandeur of Gamla stan, has exchanged working class squalor for a leading place in European hipsterdom. All, though, are representative of a different face of Stockholm.