Auctions, excitement, and a slice of life in Seoul’s largest wholesale food market.

In the mid 1980s, Seoul faced a crisis. Already heaving with 2.3 million people in 1960, twenty-five years later the city had quadrupled in size to over nine million people; even more flooded its satellite towns and suburbs. The city was due to host the 1986 Asian Games and, most importantly, the 1988 Summer Olympics, driving even more people to the city. The challenge of how to house and transport these new arrivals was one thing; how to feed them was quite another.

The answer was the Garak market. The city government, in that decisive and ruthless way that Seoul governments throughout the decades have tended to act, razed rice paddies and agricultural land near the city centre, just east of the newly created Gangnam district. In their place was built an enormous market: first fish and fruits, in 1985; then livestock in 1986; and finally the vegetable market in 1988. Today the market occupies 543,000 square metres – 134 acres – of prime land, and is open 24 hours a day, every day of the year.

The market is a fractal of ordered taxonomy. Stores selling apples are clustered together, their seemingly identical wares lined up in seemingly identical boxes. Next door are the pear sellers, and near them those hawking citrus fruits. Street upon street of stores stretch outwards in every direction in a regular grid, facing broad roads; signposts direct you from the spring onion section to the garlic section, from fruits to seafood.

Layered on top of this order, though, is a picture of perfect chaos. Scooters modified with luggage racks that tower above their riders’ heads race in-between pedestrians, sounding their horns. Battered electric delivery vans with deep scars down their flanks load up, turn around on the spot, then whirr off with an electric hum. Everywhere, buyers and sellers alike pack the halls. They walk from store to store to inspect the produce; they play cards; they gather at the many restaurants that serve the market, slurping noodles and settling the day’s scores. 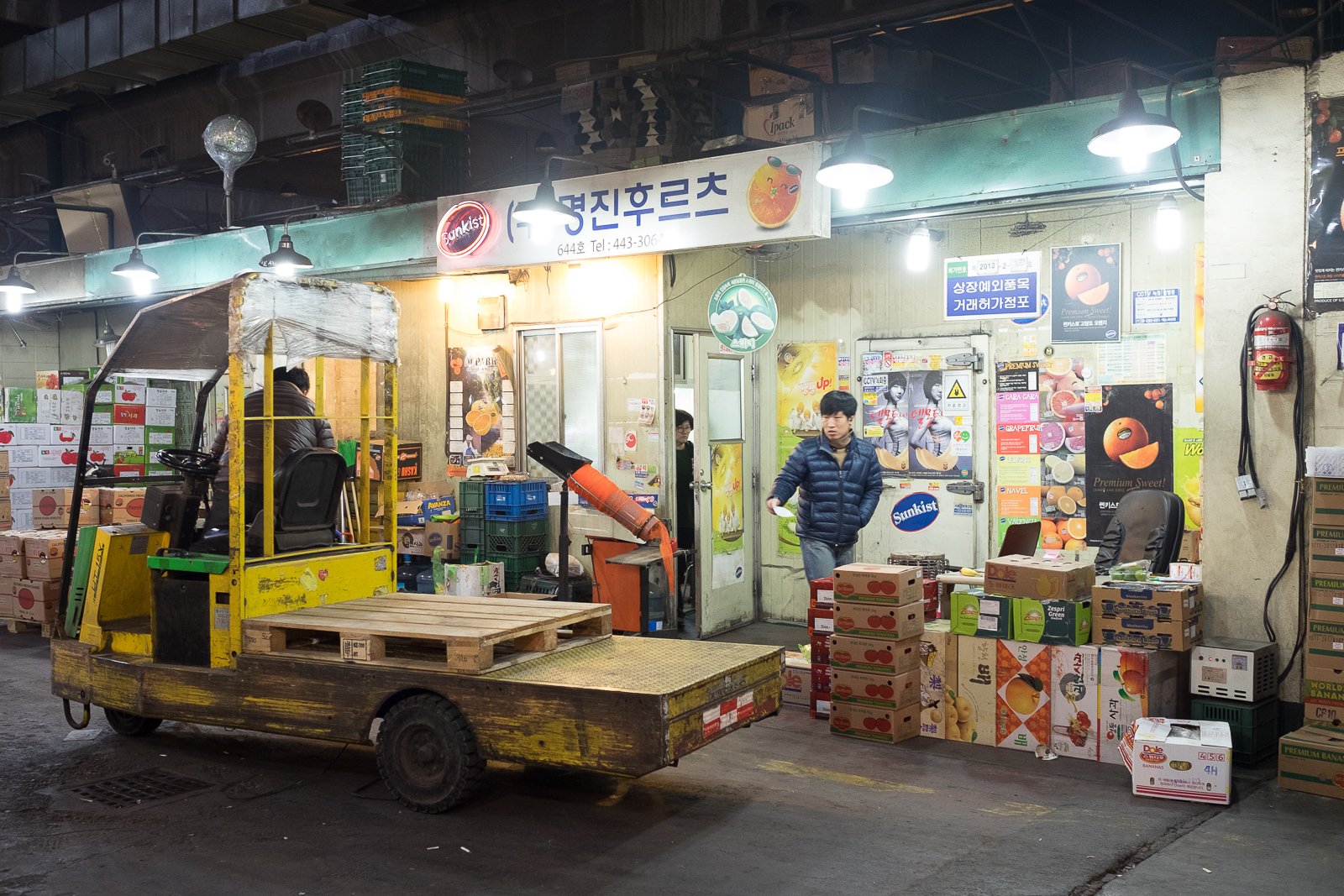 After what seems like hours of walking, the rows of stalls open up into a large hall. A crowd is converging on one corner; the men (they are exclusively men) mill around stacks of fruit boxes, peering into the ones at the top, stooping to examine those at the bottom. A woman with a cart arrives selling “mixed coffee”, a potent mix of instant coffee, powdered cream, and absurd quantities of sugar – a bargain at 800 won, or about 50p, and essential to getting through a long day at the market. Soon, two men wheel over a white, metal frame, and clamber aboard; an LCD display at the top flickers on, and the auction begins.

One of the men bursts into a breakneck monotone, indecipherable even to native Korean speakers, sounding for all the world like a drum ’n’ bass MC, interrupted now and then by his partner who plays the role of hype man. The buyers, their fingers a blur, enter bids onto the keypads of handheld electronic devices, glancing up in unison periodically to examine the display. The auctioneer’s vocal performance continues to unravel onwards; every now and then he thumps a button, to move onto the next lot, without interrupting his machine-gun chatter and seemingly without reaction from the crowd of bidders massed below him. Suddenly, though, the crowd disperses, the sound stops, and the auctioneer steps down from his platform, wheeling it away to the next auction. All the fruit, presumably, is sold; the auction is over.

As Seoul is to other cities – larger, denser, louder, busier – so its markets are to those in other places. Feeding its 26 million people requires a market that almost qualifies as a city in its own right, its streets lined with produce, its traffic the same mix of mopeds and hurried pedestrians as elsewhere in Seoul. We visited at 7:30am, long after the peak auction times, when the day was in theory winding down to its close. But I suspect Garak, like Seoul itself, never really sleeps; there’s always a deal to be made, always produce to be shifted, and so it pours itself another mixed coffee and carries on.