A fishing town on South Korea’s east coast, nestled between mountains and sea.

The road climbs and climbs through a towering granite valley, flanked by hills bestubbled with deciduous trees on a snow-white face. It climbs higher still, alongside a frozen river, its edges marked on both sides by wind-sculpted banks of snow 40 or 50 centimetres deep. A series of switchbacks announces the arrival of its steepest section until suddenly, around a final bend, the road reaches its peak a thousand metres above sea level near the summit of the Hangyeryeong mountain.

In the car park of the Hangyeryeong service area, the wind tears through me, freezing me to my core; the car’s thermometer reads -14ºC, but this wind transforms the uncomfortable into the unbearable. It’s just possible to brave the cold long enough to admire the view down through the valley that opens up here, past waterfalls and vertiginous drops, to the sea and to Sokcho. 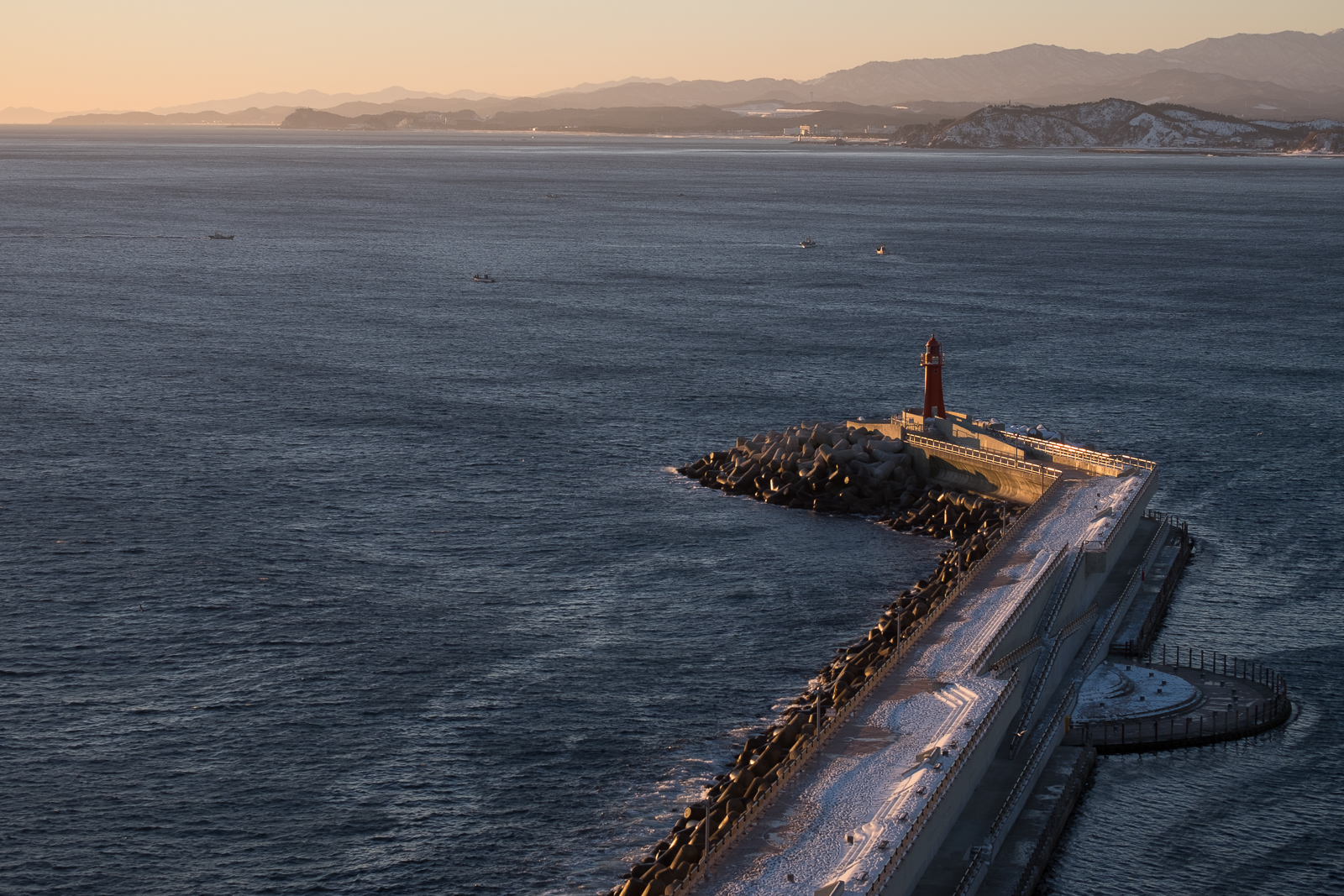 The fishing town of Sokcho is nestled here, between the mountains and the sea, cut off and cut loose from the rest of the country. Part of North Korea in the earliest days of the peninsula’s division, from 1945 until the end of the Korean war in 1953, the region remains isolated through the quirks of geography. It has its own micro-climate and its own micro-culture, tempered only by the summer weekenders visiting from Seoul, two hours’ drive away.

The road winds down from Hangyeryeong into Sokcho itself, opening up into a broad plain as the mountains recede and the sea beckons. The town’s buildings rise up quickly, and its scale becomes apparent: a mere hamlet compared to Seoul, but much more than a fishing village. Apartment buildings, shops and restaurants line the broad streets that run in a horseshoe around the town’s harbour, home to Sokcho’s sizeable fishing fleet and to the ancillary industry and commerce that supports it. Fishing boats of all sizes come and go from the harbour at all hours, landing their catch on the quayside and into the hands of the waiting merchants.

At its northernmost extent, the harbour runs in a neat circle, fringed with a row of fish markets. Further south and further inland, the harbour opens up into a larger, rectangular space, packed with boats and surrounded by fish restaurants. Sokcho is famous for the latter, and for two styles of food in particular.

The first is an iced soup called mulhoe. Meaning “fish in water”, it has a thin, red, chilli-heavy base; ice; and, most importantly, plenty of raw seafood. Nothing is fixed – it depends on what’s fresh – but ours had squid and thinly sliced fish. Cold and spicy, fresh and earthy, it’s like nothing else I’ve ever tasted.

The second is – in the grand tradition of Korean barbecue – fished grilled at the table on embers and eaten as it cooks. Mackerel, murrel, fish with their roe, squid, octopus; the selection is made by the waitress, who expertly chops and turns the fish as it cooks, leaving the guest to sit back and absorb the sounds and smells. The barbecue leaves the fish with a beautiful char, and seafood smells mingle and dance in the air. 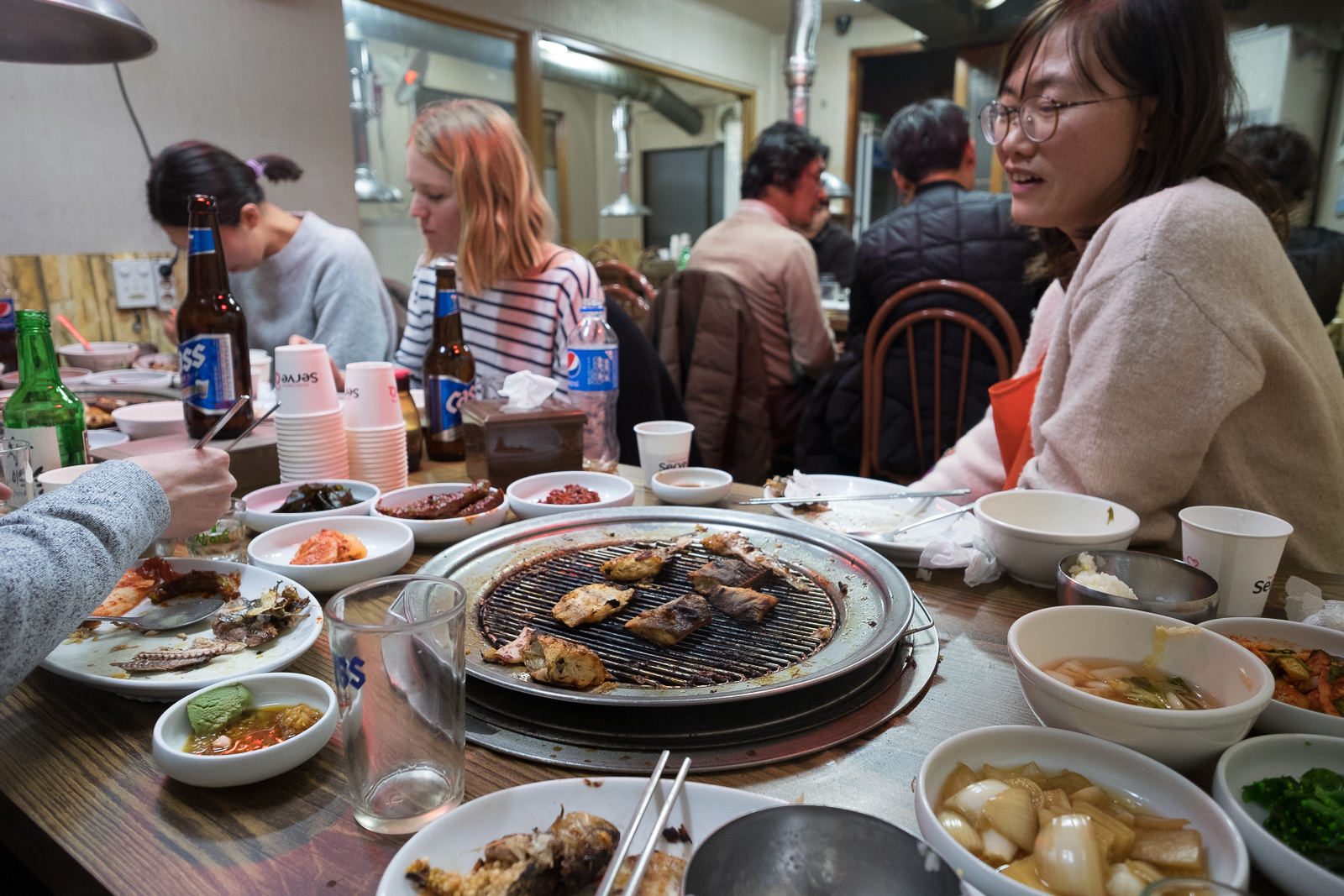 In the mornings the sun emerges from the horizon over the sea, bathing first the mountains and then the the town itself in its amber glow. Koreans flock here in their thousands on New Year’s Day, lining the beaches to take in the first sunset of the year, hoping to gain good fortune. The light, raking across the wind-ruffled sea, catches the departing fishing fleet, beneficiaries of the same good fortune to be putting out on such a beautiful day.

Superficially, Sokcho is not a beautiful place. It’s a squat and hunkered-down, spilling out from its central harbour in unplanned and untamed chaos. Its buildings are difficult to love, all neon-plastered fishmongers and graceless apartment buildings flanking too-wide roads. But that misses the point. It’s not supposed to be a beautiful place; it’s a real place, a place with a soul, built around its fishing fleet and thriving with it. This is what Newlyn or Grimsby or Fleetwood must have been like in the glory days, before the rot set in and the fish stocks fell and a way of life died; before the chronic unemployment and the humiliating slide into slow, festering degradation. Sokcho, it seems, proudly thrives; long may that continue.